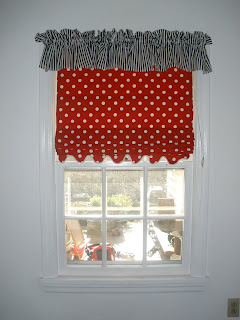 If you’re the crafty type who’s handy with a sewing machine and you’re working with a limited budget, you may have wondered if it’s cheaper to sew your own curtains, linens and throw pillows rather than buy them.

For example, I sewed my own Roman shades for my three kitchen windows, and it cost me about $100. It would have cost me about $150 for three Roman shades through Target, and $240-270 through Pottery Barn. So in this instance, I definitely saved money by making my own. Plus, I got to choose my own fabric and design — see the above photo.
But I’ve been debating about sewing some cotton, floor-length curtains. It would cost me about $25-28 for the fabric for one curtain. At Pottery Barn, I would pay $69, and at Target, it would be about the same price as if I made them. But it might be cheaper to go with Target curtains if they are on sale, and if the fabric I choose to make them with cost more than $12 a yard. It can be a real toss-up sometimes.
In another example, I sewed all my own throw pillows (so much fun!) Each pillow cost about $12 to make, which included the cost of the insert. At Pottery Barn, just the pillow cover costs nearly $40. At Target, they cost $15-20. Obviously, it’s cheaper to make your own throw pillow.
Bottomline: It’s almost always cheaper to sew your own fabric decor when you want something that is the caliber of what boutique stores carry. But when you want something fast and don’t care about the quality (eg. curtains for your basement windows, shower curtain for your basement shower), it might be cheaper to buy something on sale at a Big Box retailer.

What happens to your unwanted items
Too many cardboard boxes and plastic packaging in your life?
What does this organizer do with your unwanted kids' clothes and toys?