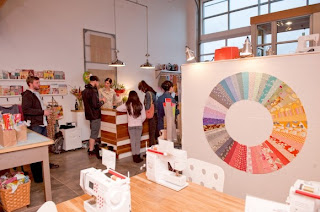 Have you been longing for some new throw pillows, curtains, maybe a duvet cover, but don’t have the money to buy them or a sewing machine to make your own? Then you are in luck!
The craft geniuses behind my favorite fabric store Bolt (2136 NE Alberta) have opened Modern Domestic, an indoor crafting space where you can sew on their high-quality sewing machines for $8 an hour. You also get the use of their cutting mats, scissors, ironing board and other essentials in your drop-in fee. And all of this takes place in a lovely Danish modern-inspired space.
Don’t know how to sew? They offer lessons ranging from beginning sewing to felting and silk screening. And on their Friday night “Sew-cials,” you can bring your sewing project, get some help if you need it, and craft alongside your friends for a mere $10.

If this sounds like fun to you, look up Modern Domestic at 1408 NE Alberta Street in Portland. I’ll probably see you there.

Picture of their craft space from their grand opening, courtesy of Modern Domestic.