My husband was going through all of his old neckties, and he asked me if I wanted them. My first impulse was NO. After all, some dated from the early ’90s and were quite garish. Then the wheels started turning, and I told him to give me two days. If I hadn’t thought of a project in that amount of time, the neckties were gone.
This is what I came up with. It’s a curtain for our back door, the only place where such a curtain would not clash with the other decor. 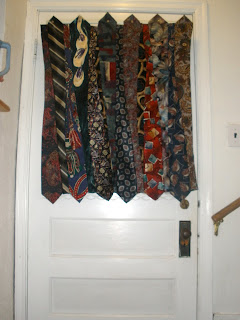 I have to say it was a bit more challenging than I anticipated. I laid them all out, making sure they were straight (that was the hard part), taped them to the floor, and stitched the sides together. In one section I had to splice in a tie to cover a couple of gaps. I folded the edges of the tops under and stitched those. 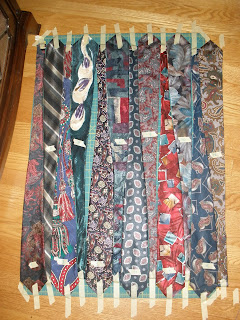 Then here’s my special trick: Instead of making loops or a sleeve to slide through the curtain rod, I simply hung the curtain with eight neodymium magnets. These are incredibly strong, inexpensive magnets that are about one-quarter inch square. Buy them at KJ Magnetics.
To fold the curtain up, I simply used more magnets. You could make loops if you didn’t want to use magnets — I was just getting tired of doing all that tedious hand sewing. 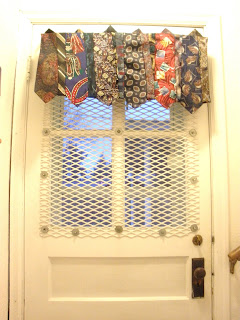 Now you have a unique, yet functional light-blocking curtain that cost you less than $5 to make. Fantastic!