How often do you see a version of this image below as the “after” picture in a room reorganization or decoration? All those matching bins on the shelf look so nice lined up in a row. But while this system looks great in magazines and Pottery Barn store ads, it doesn’t work very well in reality. 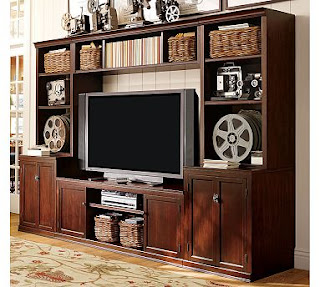 This is because pulling out a bin, dropping an object in, and pushing the bin back in requires three steps. By comparison, just putting an object on a shelf (or on the floor) takes one step. So what do busy people tend to do with a bin system? They save themselves two steps – 66 percent of the work – by putting the object on the shelf BESIDE the bin or on the floor BELOW the bin. Thus, all those lovely, expensive matching bins go to waste. When I see a bunch of them at clients’ homes in one of their earlier attempts at getting organized, they are often empty, mostly empty or full of forgotten items.

Bins are even more likely to get neglected if they are in a closet, especially if they are high up on a shelf. They can also be dangerous, because you don’t know what’s in them when you pull them down, thus risking a heavy load falling on your face. This is why I don’t recommend using them in a closet. I’m a fan of open shelves instead. Putting an object away with one step, rather than two or three steps, is the easiest way to make sure things get back.

One situation where I do recommend the use of a bin is when the bin is sitting on a table or counter out in the open without a lid. For example, a shallow, open bin sitting on a hall table is the perfect place to drop keys, cellphones and sunglasses when one walks in the door.

In all other situations, just say “no” to the bin. Your items are more likely to get put back if they simply live on an open shelf.

I was in The Spruce, talking about what pro organizers notice in your home
Pretty organizing containers are not enough
Why January is the best time of year to buy new organizing products
7 tips for organizing bathrooms