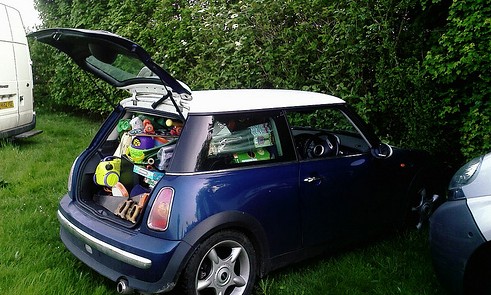 I have never blogged about organizing the inside of a car before, because as a professional organizer, I have always thought organizing a home was more important. That was until I learned how deadly a cluttered car can be to you and your children in a car accident.

In a car accident, whatever is sitting in the seats, on the dashboard or back of the car is sent flying. This stuff — your diaper bag, groceries, extra bottle of antifreeze or car oil — moves through the car at whatever speed the car was traveling at, which means at a high-speed accident, it can slam into you or your child with all the force of a baseball bat. People have gotten killed from their groceries becoming projectiles during an accident. There have also been instances of people being killed by their paint cans, golf umbrellas and pets.

Surprised? Alarmed? Boy, I was. Immediately after the meeting where I learned about this danger, I returned to my car and put nearly everything in the trunk. I tucked my purse under the passenger seat, because items secured under the seats will mostly just slide around on the ground during an accident. From now on, I will always make sure to drive with no unsecured objects in the car’s interior.

I have also made a change in my business practices. I used to advise my organizing clients to put the stuff they are intending to donate to charity in the front seat of the car as a visual reminder to get rid of it. I also used to encourage them to put items that needed to be returned to the store or library in the front seat for the same reason. Not anymore. Now I will tell clients to lock those items securely in the trunk. If they need a reminder (because it’s easy to forget what is in your trunk), they can write themselves a Post-It note and leave it over the car’s clock or radio.