I don’t know if being organized is at trait you are born with or skills that you learn (perhaps a bit of both?), but I will say that Nathan, my 7-year-old, has demonstrated some cute organizing habits ever since he was a wee child. When he was 3, he made this: 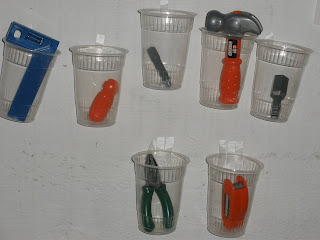 It’s a wall organizer for all of his tools. When he was 5, he made this:

It’s a holder/organizer for his toothbrush.

You’re thinking, wow, pretty organized, right? So you can imagine my surprise when I made this discovery last week. 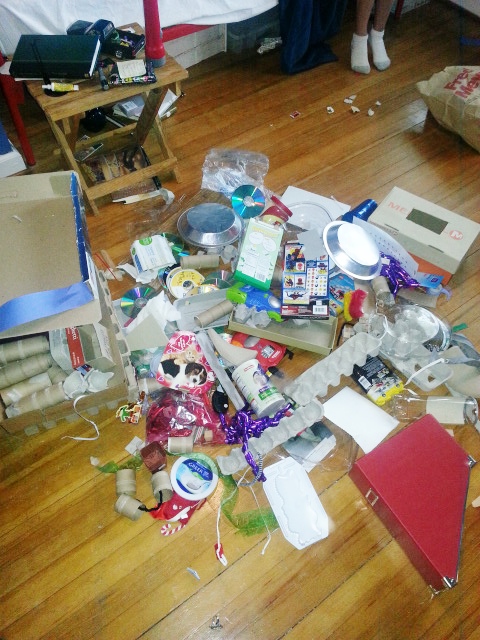 Apparently, he had been saving bits and pieces of trash/recycling for Lord knows how long under his bed. He got the idea from his kindergarten teacher, who let the class build with throw-away material every Friday. It was called “Fun Friday.” Nathan loved building with trash so much, that he evidently had been squirreling away as much as he could.

When I made this discovery, I told him he could only keep as much as would fit into two boxes. So we dragged it all out in the middle of the room and sorted it by type: paper in one category, plastics in another, metal in another, etc. Then he picked the best pieces from each pile and we boxed or bagged them up and labeled the containers. It sounds pretty simple, but this whole process took an hour.

1. Many people think that as a professional organizer, I live in a perfectly organized house. I do not. I don’t have control over every last square inch of my home, nor do I try to.

2. Many of you readers have kids, and I bet your kids like to save bits and pieces of trash too. You might want to take a look every so often and see how much they have saved, lest that stash turn into a dust-covered, spider-hiding, fire-hazard heap under their bed.

What crazy things have you found under your kids’ beds? Let us know in the comments below.