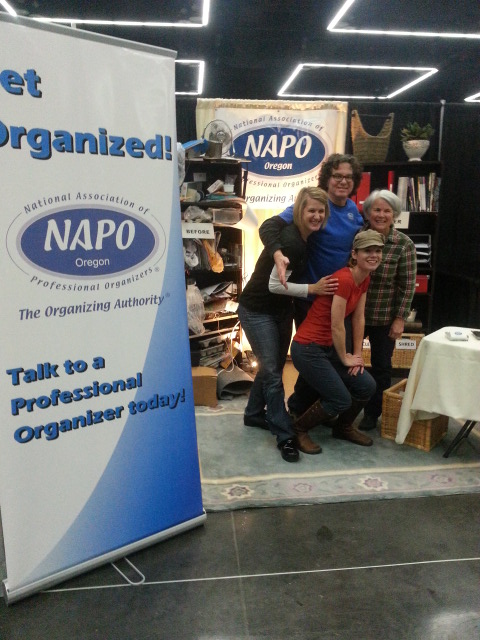 … got the NAPO-Oregon organizers’ booth at the Portland Home & Living Show set up in 90 minutes flat!

The set-up crew (that’s me, crouched uncomfortably in the middle) had a great time setting everything up on Thursday. First, I got to drive my pick-up truck INTO the Convention Center, past other people’s booths. It felt so naughty, like I was driving in the mall. I had to back up part of the ways without the benefit of my rearview mirror, because I was hauling those two big bookcases! Wow, if driving in a building isn’t stressful enough, try doing it backwards without a mirror past other people’s booths!

Then our crew had plenty of laughs as we discovered that we had duplicates and triplicates of EVERYTHING, from signs to handbooks to props. Leave it to professional organizers to make sure NOTHING is forgotten!

Mark Nedleman used an artist’s touch to make an exquisitely messy “before” version of the bookcase (on the left in the photo.) I emptied my home office of all of my Ikea office supplies to do a large portion of the “after” bookcase (on the right).

Carolyn Rowe channeled her mom instincts and brought apples and PB&J for everyone! Cut-up, no less!

And Christy Charnquist loaded me up with caffeine, helped me drive backward through the Convention Center and made sure that sign in the booth was straight and centered — all without the benefit of measuring tape or level (we brought them, we just didn’t need them. Organizers have measuring devices hardwired into their eye sockets. 😉 )

So come out and visit us at the National Association of Professional Organizers (NAPO-Oregon) booth #249 at The Oregon Convention Center today until Sunday at 5 p.m. Get your free admission ticket with this link! See you this weekend!

Pretty organizing containers are not enough
Will you make me get rid of my things?
Still going strong, even with the county freeze!
We are looking to hire another professional organizer!